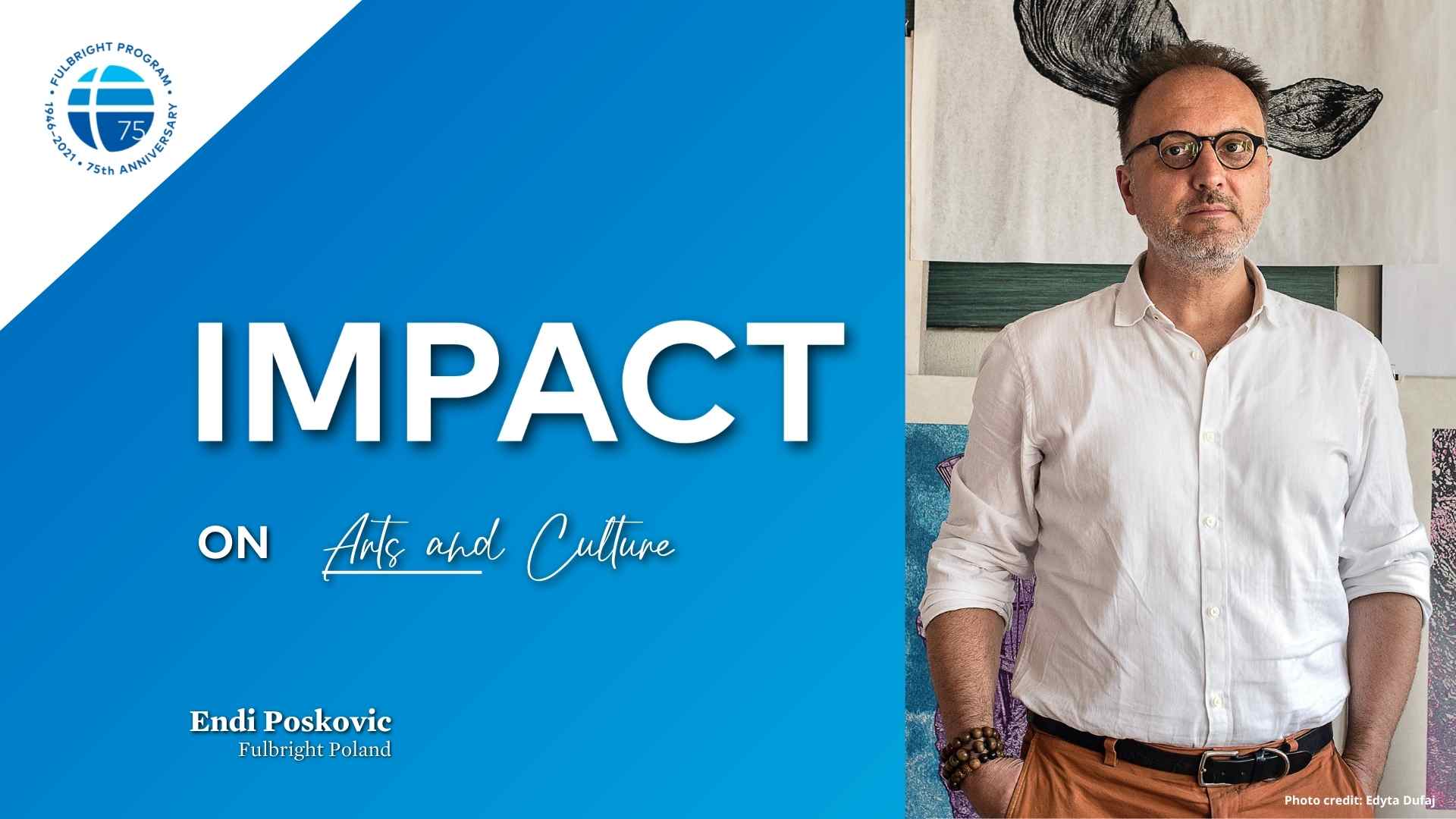 In 2021 the Fulbright Program celebrates its 75th anniversary (in Poland, the Program has been present for 62 years). We are joining this celebration by presenting monthly Fulbright alumni stories that showcase the positive impact of the Program on local and global communities. Each of these stories reflects the theme of the month. The June theme is “Arts & Culture” and our Fulbright story focuses on Endi Poskovic, who talks about his artistic work and how it ties with the experiences he gathered during the Fulbright grant in Poland. More information about the 75th anniversary of the Fulbright Program can be found at fulbright75.org.

Endi Poskovic was educated in Yugoslavia, Norway, and the United States. His works have been exhibited worldwide in numerous important international biennials and triennials, and have brought him many notable awards and honors, including grants and fellowships from the John Simon Guggenheim Memorial Foundation, the Polish-U.S. Fulbright Commission, the John D. Rockefeller Foundation, the Pollock-Krasner Foundation, the Norwegian Government, the Camargo Foundation, the Flemish Ministry of Culture, the New York State Council on the Arts, the MacDowell, and the Art Matters Foundation, among others. Museum collections which hold works by the artist include the Philadelphia Museum of Art; the Fogg Art Museum, Harvard University; the Detroit Institute of Arts; the Art Museum of Estonia, Tallinn; Fondation Fernet Branca, France; Alive Jincheon Printmaking Museum, South Korea; the University of Iowa Stanley Museum of Art and many others. He is a Professor of Art in the University of Michigan Penny W. Stamps School of Art & Design and Faculty Affiliate in the Copernicus Center for Polish Studies-University of Michigan. More information about the artist can be found at endiposkovic.com/home.html

“My involvement with diverse educational and intellectual communities in Poland spans some two decades, during which I have been an active participant in the discourse concerning Polish arts and education. Since 1999, I have participated in numerous international conferences as well as major exhibitions throughout Poland, including several iterations of the Krakow International Triennial, one of the most prestigious international exhibitions in the field of printmaking.  Since my arrival to the University of Michigan in 2008, I have worked closely with the University of Michigan Copernicus Center for Polish Studies and Penny W. Stamps School of Art & Design to establish professional and educational partnerships with Poland and to bring Polish artists and scholars to the United States to conduct lectures and workshops. During this time, I have formed long-lasting relations with several institutions of higher learning in Poland, distinguished artists, designers and educators, and developed a keen understanding of the importance of arts and education in Poland.

In 2015, I was awarded a U.S. Senior Fulbright Scholar Fellowship for the 2015-2016 academic year during which I was a guest professor at Jan Matejko Academy of Fine Arts in Kraków. My Fulbright year in Poland was remarkable on so many levels. I started a new series of creative works titled Dream and taught an advanced art seminar at Jan Matejko Academy.  I also traveled throughout the country lecturing at universities and academies in Łódź, Kielce, Wrocław and Warsaw.  In each community, I encountered amazing artists and designers, and dedicated educators and their students. Living, working and teaching in Poland offered a deeply rewarding experience, providing me a chance to grow in new directions, meet new colleagues, make friends, and immerse myself in contemporary Polish society as I explored its rich cultural past and present. 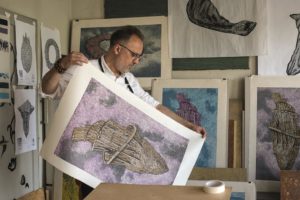 Throughout my Fulbright year in Poland, I maintained a working artist studio in the Kazimierz district of Kraków, on Szeroka street, right across Synagoga Stara (the Old Synagogue).  An interesting coincidence about this particular workspace, in which I worked nearly every day, is that at some point in the past, this was a studio of an important and well-regarded  Polish artist-printmaker, Jerzy Panek. Panek’s artworks are held in the permanent collections of the Museum of Modern Art in New York City and the National Gallery of Art in Washington D.C. amongst many other museums. Panek occupied the studio for many years, and it was passed to other artists after his death in 2001.  The occupant of the studio at the time, a professor at Jan Matejko Academy, let me use it as my working space for an entire year. When I learned the story behind this studio, I could not believe it.  The space didn’t change much since the days of Jerzy Panek in the 1970s–it was small, but wonderfully charming.  In some delightfully eccentric ways, I was enchanted and even more motivated to make the most of my experience there.  It was in this tiny apartment-studio space that I embarked on the most ambitious body of works in my career, a series of large scale multi-color woodblock prints titled Dream. In Poland, my Dream Series developed into an allegorical tale, a sort of roman à clef about displacement and my faith in the orthodoxy of visual image. In these new works, the visible constitutes a poetic language evocative of mystery, affording the thematic iconography to maintain its presence in the apparent opposition between reality and illusion.

In December 2017, I returned to Poland as the keynote speaker at the international conference ‘the Post-digital printmaking / Redefinition of print’ organized by the Eugeniusz Geppert Academy of Art and Design in Wrocław, to share the research I started during my Fulbright year.

In summer 2019, I was invited to chair a panel titled ‘Futures in the Present: Polish Art and the Quest for Democracy in the 1960s’ and presented a paper at the Seventh World Congress on Polish Studies at the University of Gdańsk.  The University of Gdańsk conference theme ‘Anniversaries’  was an ideal forum to present the research conducted during my Fulbright fellowship. My paper examined Polish arts in the post-World War II period and its symmetrical activities associated with the Krakow International Print Triennial, the longest running open-invitation international art contest in the field.  It also explored a conscious, systematic engagement of Polish artists and educators seeking to establish cultural and social bridges with the larger international community of artists outside of Poland during the 1960s and 1970s. As such, their work presents a particularly important case study about art and culture in Poland in the second half of the 20th-century for it suggests democratic discourse through art and education at the time when Poland had closed borders, and intimate radical political and social reforms which are to come following the Solidarność movement and subsequent elections in 1989.

The interactions with creative communities in Poland produced a long-lasting dialogue and exchanges affording me numerous opportunities to share my Fulbright experience with the broad artistic and academic communities at home and abroad.”